In spite of the relatively short duration of our trip, by the time we woke on Sunday morning – our final day on the trail – it seemed like ages since Brooks had dropped us off at Laurel Falls. With only a five and a half mile trek to Table Rock, we were excited about completing our journey and about the upcoming night in Greenville (wives! showers! cold drinks!). But we were also determined to enjoy our last hours on the trail. Our walk on Sunday would include Pinnacle Mountain and Drawbar Cliffs which were reputed to provide breathtaking views. They would not disappoint.

Ashten and the familiar white blaze of the Foothills Trail

We ate breakfast, quickly stuffed our packs and were walking by 8:30. As was the case throughout our days on the trail, Ashten took the lead. At 12 years old, he definitely had the most energy of anyone and took great pride in being our “spider web catcher”, knocking down webs for the rest of us. The walking was strenuous and uphill as we made our way to a bald granite overlook a few hundred feet below the tree-covered summit of Pinnacle Mountain.  Though Sassafras Mountain is the highest peak in South Carolina, a portion of that mountain extends into North Carolina, making Pinnacle the highest mountain entirely contained within the borders of the Palmetto State, at 3,415 feet.

The views from the granite outcropping on the eastern side of the mountain were truly spectacular. It was a clear day and we could see for miles, including outstanding views of Table Rock and Paris Mountain. We lingered, snapping pictures and soaking in the incredible scenery. Everyone agreed, it was worth the 22 mile walk just for this vantage point alone.

From there it was less than a mile to more stunning scenery at Drawbar Cliffs. Where the outcropping at Pinnacle was a true cliff with a dramatic and knee buckling drop-off, Drawbar was a gently sloping granite face which invited – insisted upon – a lingering stop. We happily did just that. With views of Lake Keowee and miles beyond, we were again handsomely rewarded for our efforts.

All downhill and waterfalls galore

At length, we bid adieu to Drawbar and rejoined the trail. From here it was a relatively easy downhill jaunt over the last three miles to Table Rock State Park. After seeing almost no water on Saturday, it was in abundant supply on this last stretch, including over a dozen medium to small waterfalls. It felt like we were back in a rainforest, which technically speaking, we were. 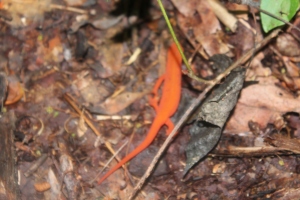 An orange salamander making his way along the trail

Along the way we passed an intriguing orange salamander and two snakes – the second of which darted onto the trail right in front of Cole, causing him to shatter the State high jump record.

As we grew closer to Table Rock we began to pass day hikers headed in the opposite direction to take in the views we had just enjoyed. From our bulbous packs, generally disheveled appearance and impressive bouquet, they likely thought we were completing the full 77 mile hike from Oconee State Park. We were happy to let them think that.

By noon we were done. Back at the Table Rock parking lot, we made a b-line for the lake and a refreshing dip. By 1pm, we were reunited with Fran, who had spent the previous evening in nearby Hendersonville, N.C. and had thoughtfully packed a cooler of cold Coca-colas for us. We loaded our packs and drove south to Traveler’s Rest where we had a highly anticipated lunch of burgers and beer at Shortfield’s. We called wives, debriefed about our trip, caught up with Fran and entered a state of enraptured joy over our first “real” food in several days. We were a grubby but happy bunch.

Happy reunions and a stroll along Main Street, Greenville

It was wonderful to see Melissa and the other Herr girls when we arrived at the Hampton Inn just off Main in downtown Greenville. Melissa gave me a warm hug and peck on the cheek but otherwise, smartly kept her distance until I could shower. I can’t say that I blamed her.

We gathered for drinks before dinner at Sip – a cool rooftop wine bar with great views of a bustling Main Street two floors below. Afterward, as we ambled along a busy sidewalk on the way to dinner, it felt strange to walk without a pack, unburdened and light of step, and odd not to be on the lookout for a suitable campsite at that time of day. I was reminded how quickly you fall into routine in the woods and how powerful those routines can be. And despite the unbridled joy of a much needed shower and the fun of being with family in my old town, I found myself missing the trail.

We ate that night at Soby’s on Main, a downtown Greenville institution since I lived there in the late 90’s. It was a sensational meal and still somewhat novel to eat off of plates rather than out of a freeze-dried meal sack.

After dinner, Melissa and I strolled hand-in-hand along Main in the fading light, through Greenville’s recently revitalized West End district. The West End area was, when I lived in Greenville, an old warehouse district, mostly abandoned and in serious decay. You wouldn’t walk there after dark. But over the past 15 years it has experienced a tremendous revitalization, including the demolition of Camperdown Road bridge, which opened up views of the lovely Reedy River Falls. The concrete monstrosity of a bridge was replaced by a dramatic and elegant pedestrian bridge and below that, a revitalized Reedy River Park. This investment in turn, attracted a splendid minor league ballpark and countless restaurants and shops as well as the renovation of most of the old buildings along the Main Street corridor. The result has been nothing short of amazing. Downtown Greenville is thriving and provides a powerful testament to the importance of public green space.

A walk in the woods in perspective

We walked 22 miles over two and a half days. We spent two nights on the trail, clambered over some challenging peaks, sweated buckets, enjoyed some spectacular overlooks, burned countless calories and overcame a few obstacles along the way. But to put this into humbling perspective, we covered just 1% of the length of the 2,180 mile Appalachian Trail. We averaged around 8.8 miles a day during our walk. At that pace, hiking the Appalachian Trail would take us over eight months. It takes most through hikers five to six months. On Monday I found a four foot high wall map of the AT at Mast General Store in Greenville. To put our little walk into further perspective, those 22 miles, when measured against the four foot wall map, represent about the width of a fingernail.

But even still, as Bill Bryson put it so well, we can gaze at a far horizon through eyes of chipped granite and say with a slow, manly sniff, “Yeah, I’ve shit in the woods.”