We are now just two days away from heading to France for our highly anticipated Ironman race this coming Sunday. This Wednesday we’ll board a plane at RDU, head to New York’s JFK, then cross the pond overnight arriving in Nice, on France’s Mediterranean Coast, Thursday morning.

Five of us from the FreeHouba Tri-Club will be doing the race, including Melissa and I, Andre Olivier and Lori Cove from the Raleigh area, and Martin Dvorak from Czech Republic. We’ll be joined and supported by Andre’s wife, Joanie, Melissa’s parents, her sister Lyn and Lyn’s husband Patrick.

I can tell the race is getting close by the stress dream I had the other night. In the interest of full disclosure, I should admit right from the start that I am terribly, almost comically slow in transition during triathlons. No matter how much experience I gain as a triathlete or how meticulously I organize my transition area before the race, I never seem to get any faster. And so, my dream finds me in Nice, done with the 2.4 mile swim and sitting in the swim/bike transition area (T1). I feel immense relief at having finished the swim and feel rather proud of my time. The race is going well.

For some reason, there is a large buffet table in the transition tent. Pleasantly surprised by this, I amble over to have a look. I’m hungry after the swim and feeling good about my time – I can spare a few minutes to have a bite.

While perusing the impressive buffet, complete with candelabras and a full roasted pig (with apple in mouth), I notice that there is also a large screen television on which they are broadcasting the College World Series live from Omaha – because if there’s one thing the French are crazy about, it’s American college baseball. What’s more, my Gamecocks are playing. I sit down on the large leather sofa with a plate of wings to catch a few minutes of the game while all around me triathletes of both sexes dart around in varying stages of undress (in true French fashion, the transition area is co-ed). This is the best transition area EVER.

Then to my horror, I glance down at my watch and realize I have been in T1 for over an hour! With a nauseating, urgent dread I realize that I have seriously jeopardized my chances of finishing the Ironman. As I pull myself off the couch, bloated by wings and Gatorade (or was that beer?), I shuffle out towards my bike, temporarily blinded by the blazing Mediterranean sun as I exit the tent, and am overtaken by the thought of the arduous 112 mile bike leg that awaits me. And suddenly I hear the disapproving voice of my 8th grade English teacher, Ms. Rafferty, her Yankee brogue haranguing in that “tsk, tsk” manor perfected by 8th grade English teachers.  “You’re going to rust out before you burn out, Alan” (this is something she actually used to say to me – I was not the most motivated of students at that point in my life). I awoke in a cold sweat.

Stress dreams, tying up loose ends at work, packing bikes away and inventorying equipment – it’s been a busy few days, but we are really beginning to get excited about this thing! 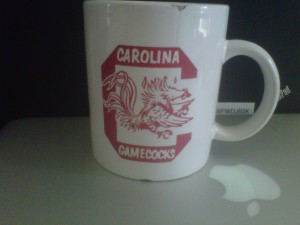 Oh yes, I have to give a shout out to my USC Fighting Gamecock baseball team which is in Omaha once again (for real, as well as in my dreams), and have now won a record 22 straight NCAA playoff games and an astounding 12 straight College World Series wins since 2010. All of this has been made possible by the world-class coaching of Ray Tanner and staff, superb pitching, timely hitting, “Reptar the fish”, and of course, this coffee cup of mine. I have sipped my morning brew from this mug on the morning of each of those 22 straight wins, so of course, it will be lovingly packed away for the trip to France, where I will continue the tradition while drinking good French coffee and keeping track of the Cocks through the wonder of modern technology that is Melissa’s iPad.

Until next time, Go Cocks! Free Lance! Fear the Fish!